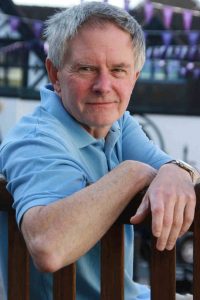 Jeff Phelps’s poems have appeared in Stand, The Rialto, London Magazine, The Interpreter’s House and elsewhere.

In 2001 he was second prize winner in the Stand open poetry competition with the narrative poem River Passage. It was later produced as a CD by Offa’s Press with piano music by Dan Phelps. He co-edited The Poetry of Shropshire, with Simon Fletcher. In 2015 he won second prize in the Wenlock poetry festival competition.

His novels Painter Man and Box of Tricks were published by the award-winning Tindal Street Press. His poetry pamphlet Wolverhampton Madonna is published by Offa’s Press.