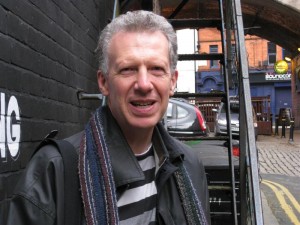 Ledbury Poetry Salon featured poet Cliff Yates on Wednesday 8 June in the Panelled Room at The Master’s House in Ledbury.

Cliff Yates was born in Birmingham. He left school at sixteen and did a variety of jobs before returning to full-time education. He won both the Aldeburgh First Collection prize and the Poetry Business Book & Pamphlet Competition with Henry’s Clock.

He read from and chatted about his new collection Jam, as well as poems from previous collections.

Jamis a various and expansive collection. There are love poems and elegies, poems about childhood, friendship and bike rides in the rain. A record collection is set on fire, ‘Kevin’ learns to breathe above water, a chicken lives on someone’s head and a boat appears in the sky. The work combines technical assurance with ambition and playfulness to challenge preconceptions. The poems are moving, surprising and funny, sometimes in the space of a few lines.

Cliff Yates writes: “Jam is the distillation of six years of writing. When it’s time for a book, I look at all the poems I’ve written since the last collection which I’m happy with, and take it from there. Some poems might not make it even if they’re strong, because they crowd out some of the others, or take up space better left empty. And what I find, putting the book together, is that the poems talk to each other in ways I hadn’t anticipated, so it’s a bit like finding you’ve been working on the one long work, without realising. At the same time, there’s a certain amount of tension between the poems, because I’m restless: my ideal would be to write a poem completely unlike anything I’ve written before. Like Picasso said: ‘If you know exactly what you’re going to do, what is the point of doing it?’ Exactly. So in all three of my collections, including Jam, there’s a certain amount of ‘push and pull’ (to borrow a phrase), whereby poems move in different directions, as if they could be part of a different type of book. The title is always important, the title of a poem and of a collection. Sometimes the title comes early on and sometimes it arrives when the book is more-or-less done; I always wanted to call a book Frank Freeman’s Dancing School, for instance, and Jam just had to be called Jam.”

‘Cliff Yates is one of my favourite poets, writing in an idiom I’d like to call ‘Skelmersdale Mystic/Domestic’ if he was in a band that band would produce hit singles that would linger in your head for years and if he was a greengrocer his vegetables would always be startling shapes. There’s childhood here, and love, and a way of seeing the world with the wrappers off that is, ultimately, Yatesian’ — Ian McMillan

‘Cliff Yates is an absolutely remarkable workshop leader and teacher of poetry whose own pupils have consistently won prizes in poetry competitions for young people. He is one of the best in the country working as a writer in schools. Highly experienced as a teacher, he can inspire staff as well as pupils through workshops which get to the heart of what writing is all about’ — Chris Meade

‘The work that Cliff Yates has done for poetry with children, and for children with poetry, is exceptional and heartening. He is at once expert and inspiring – always proving how necessary it is to recognise that ‘creating’ is a vital part of ‘educating’’ — Andrew Motion

Cliff Yates is a former English teacher whose students were renowned for winning poetry competitions. He wrote Jumpstart Poetry in the Secondary School (Poetry Society, 1999) during his time as Poetry Society poet-in-residence. He is a tutor for the Arvon Foundation and is currently Royal Literary Fund Fellow at Aston University.