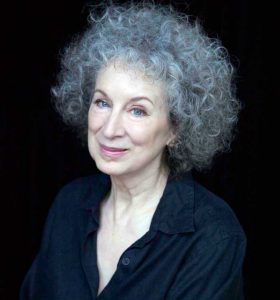 Margaret Atwood shares her favourite poems with Ursula Owen, Founding Director of Virago Press. Atwood, who has published with Virago since 1979, is the author of more than fifty books of fiction, poetry and critical essays.

Her recent novels are The Heart Goes Last and the MaddAddam trilogy – the Giller and Booker Prize-shortlisted Oryx and Crake, The Year of the Flood and MaddAddam. Other novels include The Blind Assassin, winner of the Booker Prize; and Alias Grace, The Robber Bride, Cat’s Eye, The Penelopiad –a retelling of the Odyssey — and the modern classic The Handmaid’s Tale – now a critically acclaimed television series. Hag-Seed, a novel revisitation of Shakespeare’s play The Tempest, was published in 2016. Her most recent graphic series is Angel Catbird. In 2017, she was awarded the German Peace Prize, the Franz Kafka International Literary Prize, and the PEN Center USA Lifetime Achievement Award.