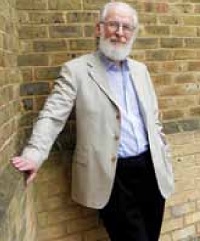 In 96 of Shakespeare’s 154 sonnets there are couplets that don’t rhyme in modern English. In the major poems, similarly, there are many lines that should rhyme, but don’t, to modern ears.

David Crystal explains the way sounds have changed since the 16th century, and describes the evolution of the present-day original pronunciation (OP) movement.

The talk is illustrated by performance from Ben Crystal, whose Passion in Practice theatre company has presented several OP productions during the past five years.