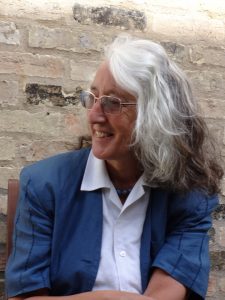 Session 4. 15.45-17.00: Angela Leighton (University of Cambridge): Women’s Voices After EBB: Lost and Found. Angela Leighton will take you on a listening journey of women’s poetry from Elizabeth Barrett Browning to the present day. She will concentrate on works that echo, recall or admire previous women poets, and discuss attitudes and influences on the way. Poets will include Christina Rossetti, Emily Dickinson, Stevie Smith, as well as various contemporaries, including Angela herself, whose work answers to that of other women poets.

Angela Leighton is the author of various critical works, including books on Elizabeth Barrett Browning (1986), Victorian Women Poets: Writing Against the Heart (1992), Victorian Women Poets: A Critical Anthology (ed.with Margaret Reynolds, 1995) and most recently, a book on listening in literature: Hearing Things: The Work of Sound in Literature (2018). In addition she is the author of four volumes of poetry. The most recent, Spills (Carcanet 2016), is a collection of poems, memoirs and stories about her part-Italian, part-musical upbringing.