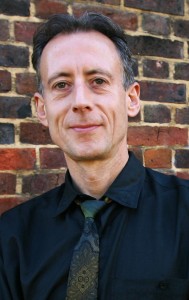 Peter Tatchell has campaigned since 1967 on issues of human rights, democracy, LGBT freedom and global justice. In 1994, he named 10 Anglican bishops and urged them to “Tell The Truth” about their sexuality; accusing them of homophobia and hypocrisy. In 1999, in London, he ambushed the Zimbabwean President, Robert Mugabe, attempting a citizen’s arrest on charges of torture.

A repeat attempt in Brussels in 2001 resulted in him being beaten unconscious by Mugabe’s bodyguards. He coordinated the Equal Love campaign from 2010, which pioneered same-sex marriage.

Peter Tatchell chats with Hay Festival director Peter Florence about the poems that have travelled with him through his life. “He’s very necessary… incredibly brave… doing good work in a world where most people are too timid” (Elton John).