Ledbury: Junction for Poetry and the Poetry Chair at Ledbury Station

Passengers passing through Ledbury station during the July poetry festival noticed something unusual. The railway station was renamed “Ledbury: Junction for Poetry” in honour of the town’s poetry festival and poetic heritage

The train operator also hosted a special ‘Poetry Chair’ at the station. Rail passengers are invited to take a moment to sit in the chair and put together their own literary piece, to be published on the Ledbury Poetry Festival website.

Fay Easton, head of stakeholder and community for West Midlands Railway, said: “Poetry is something that resonates closely with so many people and our community groups at the stations across our network have loved the Pride of Place ‘thank you poem’.  Renaming Ledbury station seems a fitting tribute to recognising the impact of poetry, particularly in light of the very special poem we commissioned last year. The poem is a literary thank you to the volunteers who brighten up railway stations across our network, and will soon be found displayed at fifty of our stations across the rail network.

“With many of the Ledbury Poetry Festival’s events just a short walk from the station, travelling to and from Ledbury by train is an easy and convenient option for visitors to the Poetry Festival.”

Phillippa Slinger from Ledbury Poetry Festival, said: “We are so delighted with this partnership with West Midlands Railway. Over the years many poets have stood on the station platform, from Robert Frost and the Dymock poets to the hundreds of international poets who have visited the Festival since it started over twenty years ago.  So to have the station named as the junction for poetry is very fitting. And it’s equally perfect to have Black Country poets travelling down the line to perform their poetry here”

The sign closely resembles, in colour, font and content, the sign that was present at the station up to the 1950s. Through trains to Gloucester ceased to run in 1959. The line to Gloucester was laid on the line of the Hereford and Gloucester Canal, the Great Western Railway having purchased the Canal. Former poet laureate and Ledbury-born John Masefield was a small boy living at The Knapp at the time, and writes in his reminiscences of his imagining the canal boats as ocean going ships, then watching the line being built over the course of the canal. These reminiscences of course provided inspiration for his later sea themed poems.

The line served Dymock and Newent on its way to Gloucester. The Dymock Poets occupied cottages around Greenway just north of Dymock. Thus many of the so-called “Dymock Poets” would have waited on the Ledbury platform for the Gloucester-bound train. The Dymock Poets are Lascelles Abercrombie, Rupert Brooke, John Drinkwater, Robert Frost, Wilfrid Gibson and Edward Thomas. The latter penned one of the most popular poems of the C20th after an experience en route from London to Dymock , known as “Adlestrop”. More on the Dymock poets here

The Poetry Chair was made for Ledbury Poetry Festival by local charity Salter’s Hill (now called Walsingham Support) as part of the Festival’s vibrant Community Programme working with hundreds of participants in the community.

BBC Hereford and Worcester ran extended pieces on the sign, the chair and the poetry during the Festival 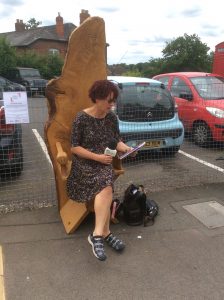 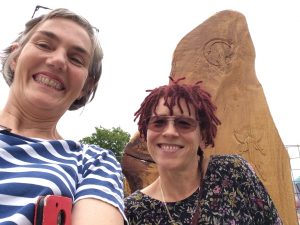 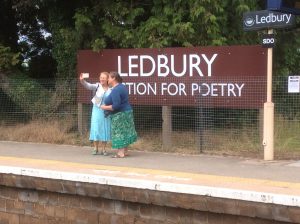 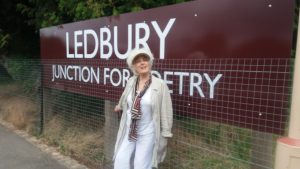