Anthony Anaxagorou’s After the Formalities combines the poet’s trained eye for incongruity with a relentless search for knowledge. Turned on the self and family history, Anaxagorou’s poetry is at times a heart-breaking reminder of the violence of love and belonging. Poems here for a beloved son chafe against the meaning of fathers and of being one. There’s a wide-open breath in his lines. Where the poet takes on race theorists and its colonial pseudo-science—and even Immanuel Kant—Anaxagorou’s genius unfolds in a brutal reckoning of his community and his countries. These poems will be read for generations to come.

Innovative, attentive and yet surreal, Wayne Holloway-Smith’s Love Minus Love fizzes with a watchfulness that unmoors the reader. To enter Holloway-Smith’s world is to encounter tragic histories, coincidences, unmasked familiarities in their absurd reconfigurations as strange and, at times, sinister. A lady stuffing a kitten into a dustbin, a baby falling out of the sky, your own milk teeth are dredged from the periphery into an unfailingly stark and linguistically taut treatment of language. This work reminds us, unforgettably, what it means to see.

“Water that sings/ through blood and brain” permeates the mesmerizing series of contemplative poems in Sarah Hymas’s melt. A triumph of imagery interweave, human and sea, these moving poems employ lush, melodious language, rhythmic pacing, a hypnotic sense of attentive presence. Who are we after all, as we acknowledge the push and pull of waves, the mysteries present within every body of water? Absence and presence shimmer in painterly floating lines which resist traditional arrangements. A long shore of single lines stitches the poems, as they also seem to float. “The sea lifts me/away from me/surrendering me to my mechanics/separate and contingent..” This is a book to meditate on for the rest of a life.

Jessica Mookherjee’s unflinching look at displacement and belonging in Tigress partners clarity with circumspection, making for complex, at times gnomic, surfaces. Readers enter a gallery and fix on a painting slowly transforming itself for the viewer into a space for their own becoming; and where family histories emerge they do so with the tight lips of a stilled dinner table as with a mother ‘wanting me to be free / and her desire for death’. There are such beautiful images throughout Mookherjee’s writing and a precision of line that delivers them breathing as if for the first time.

Skill meets great tenderness in Vidyan Ravinthiran’s sonnet series The Million-Petalled Flower of Being Here. These poems brim with ingenuity and each one is a small feat of linguistic daring. Taking love and wonderment as a broad umbrella, we track the intimacies of a marriage through displays of nationalism, xenophobia, familial distance as well as the every day moments known only between lovers. The reader is invited into the home and imaginations of a husband and wife and feels that they are less interloper than celebrant witnessing an enduring bond—not just theirs but what links us as people inhabiting the same world. As Ravinthiran writes in ‘Union’, “It’s with your love I try to love that stranger / who walked so far to read this page.”

When Em Strang closes a poem with ‘Maybe I’d say that’ we know we’re deep in world of fantasy where even the self is as unreliable as a myth. This mythology finds its way into the animal world where nonhuman creatures take on an archetypal reverence—if truth is to be had, and it is rarely sure here, it is in their honesty not our own. As in the poem entitled ‘Voice’ the poet reminds us of the instinct innate to us all: ‘Only bring the hunger that you are, the hidden / star in your throat, / that dark beacon.’ This is nature writing at it’s most surreal, its most sinister and strange. Em Strang’s voice is haunting, unforgettable, turning us into the beasts most like ourselves.

Claudine Toutoungi’s Two Tongues is often hilarious, frequently offbeat and utterly original. Her control of language, her wit, her dexterity of line and image, all these things make for a poet who feels well beyond a second collection. She revolves around her subjects with a maturity and elegance that isn’t afraid to step into the lyric spotlight but that rarely does…more often what we see in Toutoungi is a masterclass in language and form, a sense of adventure and willingness to risk, in a voice that is brimming with intelligence and humour. 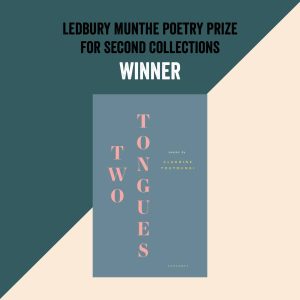 On Two Tongues, the winning collection: Toutoungi’s voice is uniquely giddy in its otherworldliness. At times obstreperous, or galloping or urbanely dry but always addictive, her language slips between tongues to arrive at the reason we speak at all: desire. Underlying many of these poems is a kind of absurd marveling that we exist in words at all.