Conversation with Claudine Toutoungi, who is the winner of the Ledbury Munthe Poetry Prize for Second Collections for Two Tongues, published by Carcanet. The judges announced Claudine as the winner at a wonderful online event, when all the shortlisted poets performed. Buy a copy of the Two Tongues here

Please could you tell us a bit about writing your second collection? How was the writing process different from the first collection for you? Was it easier or harder to write?

The poems in Smoothie, my first collection are quite far-flung because I was fortunate enough to travel a fair bit during the ten years or so I was writing them and take inspiration from a lot of different locales and countries, including Egypt, America, Canada, France and Italy. By contrast, I wrote Two Tongues in a much more condensed time-frame, over three years and with far less foreign travel involved. Possibly because of this, or because I felt emboldened by Smoothie, or because of something subliminal gnawing away that I couldn’t pin down, I think the poems in my second collection explore inner worlds far more than outer. The fractured geography of the subconscious became my stalking-ground and I think, as a result the poems are slightly more surreal in tone than in my first book.

What are your hopes for this book? For example, how you hope readers might respond to this book? Can you talk about your intentions, preoccupations, writing this book?

I’ve always been interested in shape-shifting, both emotional and linguistic.

I grew up between languages; my mother is from Cumbria and my father was from Lebanon and was a polyglot, who spoke five languages but never really had a mother tongue, so I grew up used to hearing sentences start in one language and end in another. I dabbled in multilingualism in a few poems in Smoothie, and in this new book (the title of which is a lie: there aren’t two tongues, there are at least six) sounds, dialects, other languages and all kinds of vocal slippages run amok. My acoustic sense might also stem from being partially sighted and relying more on sounds than on visual acuity to navigate the world. But whatever’s to blame, I’m hopeful the resulting poems feel both playful and also take on the confusions and collisions of our world in interesting ways. There’s a phrase Paul Durcan uses in one of his poems which is ‘slapstick loneliness’. It’s a brilliant way of summing up the tragicomedy of existence, and I’d like to hope that those twin sides to the coin – sadness and merriment are woven together in Two Tongues. I’d love it if people found joy and humour in my poems but I’m fully aware that there’s a lot of darker, murkier, melancholia in the mix as well. So – something for everyone! 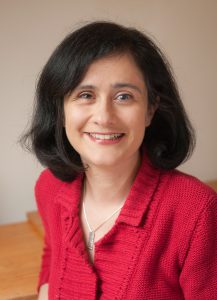