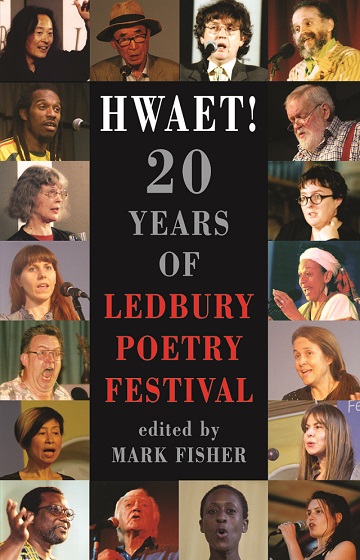 Britain’s biggest and liveliest poetry festival happens over ten days each July in the Herefordshire market town of Ledbury. Poets from all over the world join audiences drawn from near and far for an annual celebration of poetry in England’s rural heartland. There are live readings, performances, workshops, open mics, music, exhibitions, films, family events, schools visits, street happenings, a slam, a poetry competition, and much more.

‘Hwaet!’ (rhyming with cat) is the opening word of the great Anglo-Saxon poem Beowulf and other poems of that time. It means ‘Listen!’ or ‘How…’ or ‘So…’ – a calling for attention. Which is what hundreds of poets have been saying, both in their work as well as in numerous, highly memorable readings to Ledbury audiences over 20 years.

Mark Fisher was delighted to be asked to open the first Ledbury Poetry Festival in 1997 as Labour arts minister, and has maintained his support for the festival as an active Patron over many years. His anthology Hwaet! brings together 200 new poems by a wide range of poets who have delighted audiences at Ledbury Poetry Festival over 20 years as well as poems by some unforgettable visitors no longer with us who will always be remembered in Ledbury. Scattered between the poems are anecdotes contributed by poets and others offering a sense of the diverse flavour of an international poetry festival which is possibly unusual in being created, nurtured and loved by the community in which it is based.

The poets saying ‘Hwaet!’ include writers from all parts of Britain and Ireland, from North America, Europe, the Middle East, Africa, Asia, Australia and New Zealand. They include writers who’ve been poet-in-residence or worked on popular community and schools projects in Ledbury along with winners of the Ledbury Poetry Competition.

You can order Hwaet! now using the Buy Now button below.

You can pay using a debit or credit card or your PayPal account if you have one.

Video of highlights from the Hwaet! Launch event on 1st July 2016

With thanks to Neil Astley for providing the audio file.