If you could write poetry in another language, what would it be and why?

I actually do write in another language – English – or rather, I used to. While writing in English my poetic persona would be considerably different than the Croatian one. It is also partly why I largely stopped writing in the language, having realised that this other persona or, more precisely, this absence of any persona other than a deepest creative subject that both can and cannot be equalled with myself, has become predominant. Therefore I entirely immersed myself in my mother language, particularly so as I started writing more and more about the images and sensations implanted in me since childhood. But if you ask why I used English, too, then I would say it was primarily the result of my wide reading of Anglophone literature at the time, during my university years. I never wrote down in English lines or poems that were thought in Croatian; I always wrote down in English thoughts that I had in English. From them poems would develop. The rhythms and cadences of English poetry stimulated me to write in that language. That is why those poems are sometimes pastiche or at least somewhat flamboyant. Some of them I have included in the selection accessible on the Versopolis project home page (Sex with the Seasons, Discretion, On This Island…).

If you could borrow one word from another language to use in your poetry what would it be?

I have borrowed some. But I do it carefully as it can easily disrupt the flow, semantic, stylistic and phonemic, of the main language. For example, in my first book, In the End the Garden, I used certain English technical terms drawn from the domain of computing and programming, like “default” or “NPC”. They serve me well where they are now, I believe. But words I would definitely introduce except for it being too faddish would be wabi and sabi, the two Japanese terms defining specific, intuitive qualities of rusticity, quaint loneliness and pleasant imperfection. Instead, I aim to reproduce some personal variant of these moods in some of my poems.

How does poetry allow you to be free?

Since I am a citizen of a country that is – in any case, in comparison with many other countries – in most practical senses free and non-suffocating, I would not like to address politics here. However, on a more personal level, poetry allows me to be free in the sense that it acts as a mirror, a training ground, a garden, and an outlet. In this Schulzian republic of imagination we poets are quite free to roam every path, at least in the privacy of our computer screens or sheets of paper. Writing a poem allows me to be fully in contact with myself.

Do you think that poetry offers a medium to protest? (Poetry as Protest is a theme running through the Festival due to our partnership with English PEN)

Yes, I believe it does. Absolutely. There are many excellent socially engaged poets in my country and in the neighbouring ex-Yugoslav countries in which any given variant of the BCMS language is used. There are some mediocre or bad ones, too. There is this danger of betraying or underplaying the aesthetic concerns of poetry in such contexts. It then becomes an inspired protest, but hardly poetry. Of course, in good hands and with great talents, poetry that protests is a powerful testament to human freedom and defiance as well as powerful outburst of aesthetically charged super-language.

What is the value of the Versopolis project for you?

I think that Versopolis is indeed a wonderful idea and a great thing to have in European cultural life. It gives young and interesting poets a chance to present themselves to other European audiences and cultures, to bridge the barriers to poetic language with the help of translation and direct interaction with fellow poets from other environments, and to both promote their home country’s culture abroad and participate in the process of creating and/or enriching a common European culture. On a simpler level, it just makes it possible for poets to meet each other and perhaps collaborate by arranging further translations in their home countries of the poetry of those poets whose work they like. It also treats poets to short but eventful journeys which – I suppose in everyone’s case – often result in equally meaningful poems later on, when all the impressions sift through their inner apparatuses. All in all, Versopolis seems to me as one of the most important European literary institutions at the moment.

Goran Colakhodžic is appearing at the Festival on Saturday 2 July and Sunday 3 July as part of Versopolis: A Celebration of Emerging European Poets. 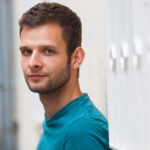