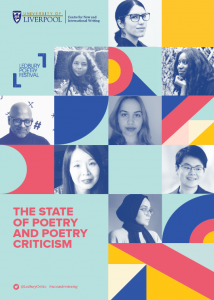 Latest state of poetry and poetry criticism in the UK and Ireland report finds that whilst inroads have been made, criticism is still too white
A new report released by the Ledbury Poetry Critics Programme in association with Ledbury Poetry Festival and the University of Liverpool’s Centre for New and International Writing reveals that poetry reviewing is still too white despite coverage of poets of colour, and coverage by critics of colour, more than doubling in the three years since the launch of Ledbury Poetry Critics which was co-founded by poets Sandeep Parmar and Sarah Howe in 2017.

The report also found that within statistics on critics of colour Asian critics are almost three times more likely to appear than Black critics.

The report’s authors state: ‘Although we have seen tremendous change since 2017, critical culture must continue to expand to accurately reflect an increasingly inclusive poetry culture. For a granular reading of our data on a magazine-by-magazine basis see our extended online report. The disparities between each publication are, we believe, as crucial as our over-arching observations.

‘The analysis here has begun to account also for the differences overlooked by categories such as ‘BAME’ and it is worth noting that within these statistics Asian critics are almost three times more likely to appear than Black critics. Removing racist structural barriers within criticism must also recognise and account for these differences. The Ledbury Critics Programme is committed to further scrutinising such inequalities. We hope this data analysis is enlightening and that it encourages reviewers and poets of colour as well as editors and readers from across the UK and Ireland to act collectively and consistently, towards equality and diversity in poetry criticism.’

‘Implementing lasting, longer-term change structural change is complex and requires a shared belief in equality among commissioning editors, critics and indeed readers of poetry and reviews.’

The research, The State of Poetry and Poetry Criticism in the UK and Ireland 2009-2019, which was undertaken by Dr Dave Coates and commissioned by the Centre for New and International Writing at the University of Liverpool, draws data from twenty-six magazines and newspapers, including The Guardian, Poetry Review and The London Review of Books from January 2009 – December 2019, examining a total of 6,804 review articles.

Key findings:
Between 2009 and 2016, British and Irish poetry magazines and newspapers published review articles by non-white critics 190 times. 4% of the total for those years.
Between 2017 and 2019, the three years since the launch of the Ledbury Critics Programme, critics of colour have been published on the same platforms 201 times. 9.6% of the total for these years.
Coverage of poets of colour, and coverage by non-white critics, have both (more than) doubled in the three years since the launch of the Ledbury programme in 2017. Just eight articles by non-white critics were published in 2009; there were 75 last year, a clear record high.
However at the time of the 2011 census, 12.9% of the populations identified as non-white. In the data set which published more than 50 articles, only 6 surpassed this figure
The London Review of Books has published 105 articles by 39 different poetry critics. All 39 were white. Those 105 articles reviewed 127 different books and all 127 were by white poets.
Within these statistics Asian critics are almost three times more likely to appear than Black critics (2.6%).