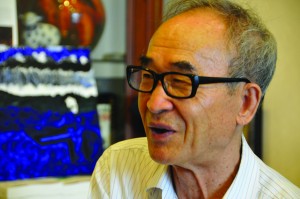 Ko Un lived through the Korean War, was a Buddhist monk and has spent three periods in prison. Now 80, he has published more than 150 volumes of poetry, including the extraordinary 30-volume Maninbo (Ten Thousand Lives), part of an oath made in prison that every person he had ever met would be remembered with a short poem.

He appears with his translator Brother Anthony to chat about his life and share his poetry.