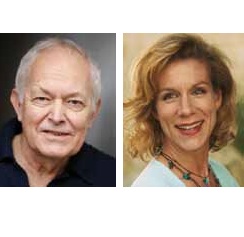 with Juliet Stevenson and Michael Pennington

Since the start of World War 1 in 1914 humanity has been caught up in war after war.

In this deeply moving event Michael Pennington and Juliet Stevenson perform poems by poets writing as combatants on opposite sides, or as victims or anguished witnesses to wars between nations, tribes and factions, wars over religion and beliefs, wars fought for land or oil or history or power, civil wars, political wars, and the Cold War.