Once you have purchased a ticket, you can email director@poetry-festival.co.uk for an open mic slot. These are allocated on a first come first served basis. Each slot is for one poem or two minutes. 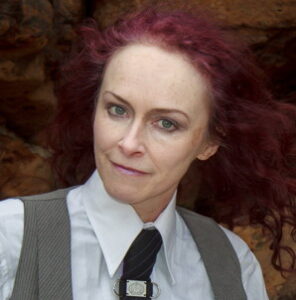 Join us for a fascinating conversation between poets, featuring Rosie Garland, a renowned performer, whose debut collection, What Girls Do in the Dark invites us to leap into outer-space, inner space and through strange night-time transformations.

Novelist, poet and singer with post-punk band The March Violets, Rosie Garland has a passion for language nurtured by public libraries. Her work has appeared in Under the Radar, The North, Spelk, Rialto, Mslexia & elsewhere. Latest novel The Night Brother is described by The Times as “a delight: playful and exuberant… with shades of Angela Carter.” In 2019 she was selected by Val McDermid as one of the 10 most compelling LGBTQI+ writers working in the UK
http://www.rosiegarland.com

Tania Hershman’s poetry pamphlet, How High Did She Fly, was joint winner of Live Canon’s 2019 Poetry Pamphlet Competition and was published in Nov 2019, and her hybrid particle-physics-inspired book ‘and what if we were all allowed to disappear’ was published by Guillemot Press in March 2020. Tania is also the author of a poetry collection, Terms and Conditions (Nine Arches Press, 2017).  www.taniahershman.com