Previous Event
Ledbury Poetry Salon with Rosie Garland
Next Event
The Line is a Circle, two-part online writing workshop led by Rhys Trimble
We're sorry, but all tickets sales have ended because the event is expired.

Ledbury Poetry Salon and Open Mic with featured poet Kate Fox, in conversation with Katherine May, best-selling author of Wintering

Once you have purchased a ticket, you can email director@poetry-festival.co.uk for an open mic slot. These are allocated on a first come first served basis. Each slot is for one poem or two minutes. 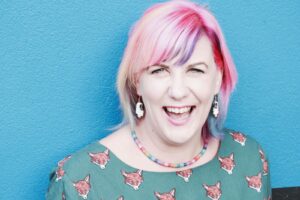 Praise for Kate Fox’s new collection The Oscilliations: “It’s both comforting and challenging to have Kate Fox as our guide through these turbulent and fractured times; comforting because Kate’s language is always inclusive and accessible and challenging because the ideas her superb poems brim with ask us to look deeply inside ourselves.” Ian McMillan

Kate Fox is a poet based in Northern England who has made two comedy series for Radio 4 and written and performed numerous broadcast poetry commissions as a regular on Radio 3’s The Verb and Radio 4’s Saturday Live. She won the Andrew Waterhouse Award for poetry from New Writing North in 2006. Her previous publications include We Are Not Stone (Ek Zuban, 2006), Fox Populi (Smokestack, 2013) and Chronotopia (Burning Eye Books, 2017).

Katherine May is a New York Times bestselling author, whose titles include Wintering and The Electricity of Every Living Thing, her memoir of being autistic. Her fiction includes The Whitstable High Tide Swimming Club and Burning Out. She is also the editor of The Best, Most Awful Job, an anthology of essays about motherhood. Her essays have appeared in a range of publications including The New York Times, The Observer and Aeon.