Singer storyteller Gecko bring his whimsical rhyming tales to Ledbury, as he releases his second 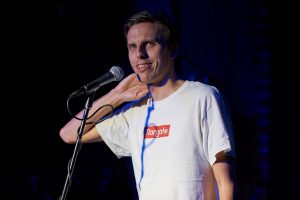 album Climbing Frame, with playful songs that cover the big things in life with wit and warmth. Gecko has previously appeared at Glastonbury, BBC Radio 1 and 6 Music. He has shared stages with the likes of Ed Sheeran, Loyle Carner, Tim Minchin & Billy Bragg and has gone viral on Tik Tok. His songwriting sparkles and his words make you instantly happy. World Poetry Slam Champion Harry Baker is a poet and a maths graduate. He writes about important stuff like hope, dinosaurs and German falafel-spoons. His work has been shared on TED and viewed millions of times worldwide.
‘Harry Baker’s intricate, quick-fire rhymes have always been on the impressive side of mind-blowing.’
(The Scotsman)